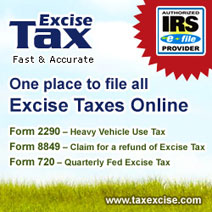 issuers of specified health insurance policies and plan sponsors of applicable self-insured health plans that helps to fund the Patient-Centered Outcomes Research Institute (PCORI). The institute will assist, through research, patients, clinicians, purchasers and policy-makers, in making informed health decisions by advancing the quality and relevance of evidence-based medicine. The institute will compile and distribute comparative clinical effectiveness research findings.

The Affordable Care Act added a patient-centered outcomes research (PCOR) fee on health plans to support clinical effectiveness research. The PCOR fee applies to plan years ending on or after Oct. 1, 2012, and before Oct. 1, 2019. The PCOR fee is due by July 31 of the calendar year following the close of the plan year. For plan years ending in 2015, the fee is due by July 31, 2016.

PCOR fees are required to be reported annually on Form 720, Quarterly Federal Excise Tax Return, by the second quarter of the calendar year. The due date of the return is July 31. Plan sponsors and insurers subject to PCOR fees, but not other types of excise taxes, should file Form 720 only for the second quarter, and no filings are needed for the other quarters. The PCOR fee can be paid electronically to the IRS with the Form 720, according to the IRS, the fee is tax-deductible as a business expense.

The PCOR fee is assessed based on the number of employees, spouses and dependents that are covered by the plan. The fee is $1 per covered life for plan years ending before Oct. 1, 2013, and $2 per covered life thereafter, subject to adjustment for inflation.

The PCORI fee is imposed on an issuer of a specified health insurance policy and a plan sponsor of an applicable self-insured health plan based on the average number of lives covered under the policy for the policy year or the plan for the plan year.

Generally, all individuals who are covered during the policy year or plan year must be counted in computing the average number of lives covered for that year. Thus, for example, an applicable self-insured health plan must count an employee and his dependent child as two separate covered lives unless the plan is a health reimbursement arrangement (HRA) or flexible spending arrangement (FSA).